Olesya Kuchinskaya has become the first TSU graduate student to complete qualification work in the ATLAS experiment at CERN. She has successfully completed training in the High Energy Experimental Physics Program, and ATLAS confirmed her qualifications. The graduate student is specializing in the application of the latest machine learning techniques in analyzing the data of the Large Hadron Collider (LHC). Now she has successfully completed work on the author's qualifying assignment for the ATLAS experiment under the guidance of Alexander Vanyashin, senior researcher at the TSU High Energy Experimental Physics Laboratory.

- My qualification task was to develop examples of machine learning (ML) for typical tasks of ATLAS physicists that could be used in various (independent) training options, - said Olesya Kuchinskaya. - A year of fruitful work, business trips to CERN, constant communication, and the help of a research supervisor - and as a result, my projects are supported in GitLab, GitHub, and Binder. Thus, other ATLAS employees have open access and the ability to use these algorithms for their own purposes. I also tested several platforms using some ML examples. The project demonstrates the promise of using the latest methods of ML.

Since 2016, Olesya Kuchinskaya has been actively involved in the work of the TSU High Energy Experimental Physics Laboratory in the experimental program ATLAS. She won the competition for a trip to CERN and was trained in special laboratory courses: Geant4 Modeling for High Energy Physics and Medicine, Machine Learning and Big Data Processing Technologies, High Energy Physics, and others. With the staff of the laboratory, Olesya Kuchinskaya developed microelectronic testing algorithms for the ATLAS muon spectrometer detector, and the algorithms were put into practice during mass testing of microelectronics. Now she is a junior research assistant at the laboratory.

While performing the qualification task, Olesya Kuchinskaya worked with US scientists from Stanford University and the Brookhaven National Laboratory. She visited CERN several times, and in March 2018 she received a grant to attend the European School of High Energy Physics (ESHEP 2018) in Italy, where she presented the results of her work. In addition, she presented her project at the ATLAS ML Forum, at the final meeting of the forum participants, and it was highly appreciated by the co-facilitators. Based on this assessment, she has been accepted by ATLAS into the list of authors and will be a co-author of articles published by the collaboration. 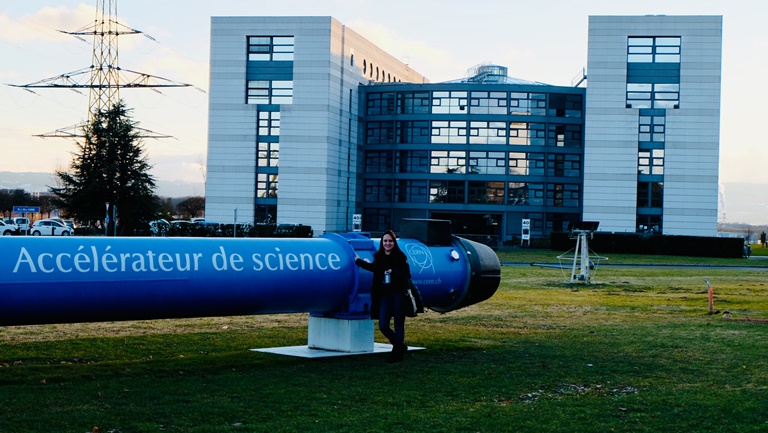 According to the postgraduate research supervisor, Alexander Vanyashin, the modernization of machine learning algorithms will significantly reduce the amount of data needed to discover the rare Higgs boson decays. Olesya Kuchinskaya successfully presented the results of her research at the II Trans-Siberian School on High Energy Physics, where she gave a guest report on behalf of the ATLAS Collaboration.

Olesya Kuchinskaya will continue to work on the analysis of ATLAS data and will participate in the ATLAS muon spectrometer modernization project, in the creation of the newest MicroMegas detectors. She will check the quality of the detectors using cosmic rays.

In 2014, TSU created a new research group on high-energy physics. The Laboratory of High Energy Experimental Physics was organized in 2017 based on this group. Its purpose is interdisciplinary research in elementary particle physics. Its head is Alexander Khodinov, Ph.D. in Physics and Mathematics.

The ATLAS experiment at the Large Hadron Collider at CERN has become one of the key projects of the TSU Laboratory of High Energy Experimental Physics. TSU physicists, in particular, are upgrading the muon spectrometer to increase its sensitivity to the registration of the Higgs boson in the muon decay channels. These works directly contributed to the discovery of the Higgs boson decay into two muons.

During the search for the Higgs boson in the decay into two muons, it is necessary to improve the existing algorithms for the search for such rare events using machine learning algorithms. To solve this problem, physicists are developing new software and methods for analyzing large amounts of experimental data.