Scientists at the TSU Laboratory for Biophotonics, with specialists from the Tomsk Scientific Research Institute of Microsurgery, have developed a new tool for diagnosing lymphedema, a severe pathology that can develop after radical treatment of several oncological diseases. The difficult outflow of lymphatic fluid leads to severe edema and inflammation of the limbs. Researchers have learned to identify the early symptoms of this using multiphoton microscopy and computer image analysis, which are used for face recognition and machine learning.

- Such pathology as lymphedema occurs as a result of impaired lymphatic outflow and obstruction of the lymph sinuses, - says Yury Kistenev, head of the Laboratory for Biophotonics, executive director of the TSU Institute of Biomedicine. - Lymphedema is genetically determined, but an acquired or secondary form is often found. It can develop under the influence of various factors, including after surgery, for example, in patients undergoing radical treatment for breast cancer.

Traditionally, lymphedema is evaluated, for example, by a change in the volume of the limb. To do this, the patient’s arm or leg is placed in a liquid. This approach usually causes discomfort in patients, but its main drawback is that at an early stage of the disease it is ineffective.

Scientists have developed a new way. It is based on the fact that with the development of the disease, tissue surfaces are transformed and there are structural changes in collagen, the most common protein in the human body and the basis of all tissues. To identify these changes, an instrument method is used - multiphoton microscopy, which enables studying tissues at the intercellular level in vivo without taking material. To assess the resulting image, computer analysis and machine learning are used.

- In this work, we used a method called the histogram of oriented gradients, - Yury Kistenev explains. - This method appeared relatively recently and is currently very popular in pattern recognition, including facial recognition. The problem was that in our case it was necessary to distinguish not individual characteristics of the tissues of an individual patient, but the features characteristic of a group of persons with lymphedema. Using mathematical modeling, we selected the parameters of this method, which help us to solve this problem.

Researchers have developed a predictive model using machine learning to diagnose lymphedema. In a test sample, it showed about 95% accuracy. According to scientists, the diagnosis of lymphedema at an early stage will help doctors to achieve the best treatment results.

The research results are published in the journal Biomedical Optics Express (Q1). The article “Application of Multiphoton Imaging and Machine Learning to Lymphedema Tissue Analysis” was recognized as the best article in the issue. 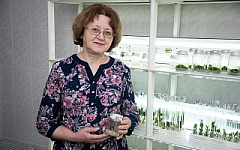