The staff of the Laboratory of Chemical Technologies is modifying the surface of the materials from which implants are made to replace bone. The approaches developed at TSU are important for solving one of the main tasks of implantology - reducing the inflammation that can lead to the rejection of a foreign body. To minimize risks, the chemists use biodegradable polymers and ion treatment of implants as a coating.

- We work with two materials - zinc oxide (porous ceramic) and hydroxyapatite, the production technologies of which were developed by TSU scientists, - says Daria Lytkina, one of the authors and the project executor. - Both substances are used for the manufacture of implants, the difference is that the first material is replaced with bone tissue over time, the second remains forever in the patient’s body. The most common complication that occurs after implant placement is the inflammatory process, which is the primary immune response to a foreign substance. Immune cells - monocytes and macrophages - perceive the implantation as an invasion and try to neutralize it.

The inflammatory process leads to rejection of the implant in 30%. The bone defect becomes even larger, which exacerbates the patient's condition. With the help of special materials, chemists try to convince the immune system that the implant is not an enemy. To do this, they use biodegradable polymers based on polylactide, a substance that has high biological compatibility with human tissues. TSU chemists have developed their own technologies for the production of polylactide and biodegradable polymers, which helps the materials to be set to the desired functional at the synthesis stage.

- Zirconium oxide and hydroxyapatite have a rough surface,- says Daria Lytkina. - On one hand, this is good because bone cells like rough materials, it is easier for osteogenetic cells to attach to them. On the other, it’s bad that macrophages react poorly to such a surface because it is abnormal for the body. Our task is to find the golden mean, to make the surface convenient for fixing bone cells, but at the same time not to irritate monocytes and macrophages. This problem can be solved by polymers, which, having completed their task of covering the implant, dissolve without residue over time.

In the case of hydroxyapatite, scientists change its surface with the help of ions of different metals - silver, copper, zinc, and strontium. At a minimum dosage, they have an antibacterial effect, which reduces the risk of postoperative infections. 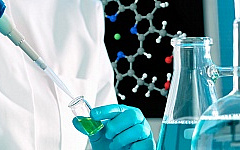