HITs students won the Imperial University Cup 2020
events
students
HITs
The competition for possession of the Cup of the Imperial University is one of the traditions of TSU's birthday celebrations. Each year, students receive a variety of tasks - to conduct a thematic procession, a student concert marathon, or a competition of art objects on the theme of “Retrofuturism”. This year, according to legend, the cup disappeared, and the faculties fantasized why the trophy disappeared, where is it hidden and how can it be found?
The Imperial University Cup was won by students of the Higher IT School (HITs).
They shot a video about the abduction, inspired by the famous crime drama television series La Casa del Papel (Money Heist).

(turn on subtitles if they did not turn on automatically) 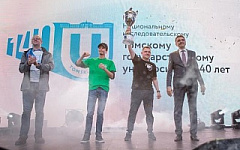