The indigenous peoples of northern Norway have joined the SecNet network, created under the auspices of TSU to study environmental changes in Siberia and the Arctic. The Norwegian Sami are increasingly faced with problems caused by global climate transformation. Representatives of these nations are ready to participate in scientific research in the hope that the results will draw the attention of the authorities to their problems and help preserve and engage the northern territories.

- The initiator of the entry was Niklas Labba, head of a major Norwegian siida (siida is a family of families united by family ties and an economy), - says Olga Shaduiko, director of the TSU Center for International Collaboration and coordinator of the SecNet network. - Two years ago, Niklas Labba, at the invitation of the network’s supervisor Terry Callaghan, took part in the SecNet seminar, where we invited Khanty, Nenets, and Zyryans to find out what local and indiginous peoples living in the territories we study face. As it turned out, the Russians and Norwegians living in the north have many similar problems due to climate warming. In particular, there is a disruption of the traditional economic structure, primarily reindeer husbandry.

Reindeer herders note that winters are getting warmer and snow often falls later than usual. Because of this, reindeer moss, which is the main deer feed, suffers. It is becoming increasingly difficult to feed the herd, herders need to roam more and look for new places. In summer, oases of vegetation - sedge, wormwood, and other herbs - began to appear in different parts of the Arctic, but such food is not very good for deer because their digestive system is evolutionarily attuned to reindeer moss. Reindeer herders complain that soon there will be a shortage of natural feed and they will have to acquire other crops to feed the herd. Given the delivery of feed to the north, this will be extremely expensive.

- Norwegian Sami also suffer from another problem - the active development of Arctic tourism,- says Olga Shaduiko. - Dozens of people come to the north at the same time for several days, ride snowmobiles, hunt, fish, but do not invest in the development of the territory. They don’t buy anything, they even bring gas with them. At the same time, guests of the north do not particularly pay attention to the traditions of the local population, they move along the migration routes of deer, scare them with loud noises, and leave a lot of garbage behind them. Niklas and the heads of other communities are trying to defend the rights of indigenous peoples in the Arctic and in Norwegian parliament, but so far most of the problems remain unresolved.

Norwegian Sami are ready to help researchers in their projects, for example, to conduct observations and take measurements at weather stations. Recently, civil science has become more and more in demand among professional studies because the participation of indigenous peoples in the studies of the north is of undoubted benefit. Indigenous people can see what scientists, arriving on an expedition, may simply not notice. Moreover, it is with the contributions of the indigenous people that very interesting and useful ideas for new projects are sometimes born. Niklas Labba believes that the results of research conducted in the SecNet network can help solve two problems. First, they will serve as strong evidence of climatic and social problems that are growing faster in the north. This is because the Arctic ecosystems are fragile and react sensitively to any changes. Second, scientific data are necessary to competently build a strategy for the conservation and development of the northern territories. 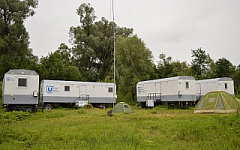