Dmitry Karlovets, senior researcher at the TSU Faculty of Physics, with Valery Serbo from the Institute of Mathematics of the SB RAS, has shown that it is possible to observe the wave properties of massive particles at room temperature, in practically any modern physics laboratory, because it is only necessary to focus the beam of particles well. The results of the theoretical research were published in an article in one of the most prestigious journals in physics - Physical Review Letters.

Usually the wave properties of particles are well-manifested in physics experiments at low temperatures, for example, in the phenomenon of superconductivity. Because of the necessity to cool the particles, research on the wave nature of matter was quite expensive.

- We found a way to perform an experiment in which the wave properties of the particles will occur at room temperature. For this, nothing needs to be cooled, it's just good to focus the beam, - explains Dmitry Karlovets, senior researcher Theoretical and Mathematical Physics Laboratory of the TSU Faculty of Physics.

According to the idea of the theoretical physicists, the electron beam needs to be focused into a spot the size of a hydrogen atom. In this case, modern electronic microscopes are sufficient, which are available in many scientific centers of the world, including TSU.

- Earlier, scientists thought that the wave properties of particles at room temperature will manifest themselves when focusing into the so-called Compton wavelength. And it is very small, for example, for an electron this is about 10-13 meters. The size of the hydrogen atom is three orders of magnitude greater: 0.5 * 10-10 meters and this focusing has already been achieved, for example, at the University of Antwerp in Belgium - continues Dmitry Karlovets.

Further, physicists have shown that the wave properties of particles will manifest themselves particularly clearly if the electrons are in special quantum states. In quantum optics, scientists are able to create microscopic analogs of Schrödinger's cat: this is a well-known mental experiment about a cat in a closed box with poison. While we are not watching a cat, it is in a state of superposition and it is not known whether he is alive or dead. So it is with waves: when two electron beams are superimposed on each other, they can interfere, that is, either amplify each other or extinguish. In the area of space where destructive interference occurs, the probability for an electron to have a certain coordinate and momentum becomes negative. It is a property inexplicable in the language of classical physics.

- If you shine a simple beam on an atom, then the electrons begin to dissipate, absorb, or do something else. And if we shine on a hydrogen atom with such a "cat" (two superimposed beams), then in the area between the beams the atom begins to feel these electrons worse because there is destructive interference, - explain the researchers. - This leads to a change in the properties of the scattered electrons and can be observed experimentally.

Thus, focusing the Schrödinger's cat of electrons on the hydrogen atom will allow us to study purely quantum effects in the collision of particles that have never been observed in particle physics.

The research is at the junction of particle physics and quantum optics and continues the tradition of the university school of theoretical physics. The work is of a fundamental nature, however, and after the publication of the article, an experimental continuation is possible. In Russia, such experimental studies are rarely carried out. In the world, they are conducted at the University of Antwerp (Antwerp, Belgium), at the National Institute of Standards and Technology (USA), at theInstitute for Metallic Materials (Dresden, Germany), at Delft University of Technology (Holland), at Tel Aviv University (Israel), among other. 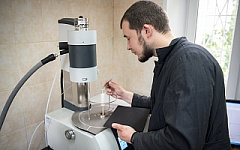