Employees of the Department of Plant Physiology and Biotechnology at the TSU Biological Institute are introducing a new approach to crop protection. Ingrafting with phytohormones - brassinosteroids helps to increase the resistance to adverse factors, primarily water shortage. The results of plant testing carried out under harsh conditions of chloride salinity showed that ingrafting significantly increases the stress tolerance of crops.

- The plant has many different mechanisms to overcome the effect of stress, but they are turned on only after meeting the “enemy”. We decided to protect them in advance even before meeting a negative factor and to train the plant’s defense systems using vaccination or priming, - says Marina Efimova, associate professor at the Department of Plant Physiology and Biotechnology. - To do this, the plants are treated with environmentally friendly phytohormones - brassinosteroids, which are responsible for the normal functioning of the plant, especially in adverse conditions - low temperatures, excess moisture and drought, diseases, and pesticides. After the ingrafting we check how long the plant “remembers” the chemical signal.

TSU biotechnologists study the response of a plant, which occurs at the molecular genetic, cellular, and organismal levels. Modern approaches help scientists to track changes are not delayed, but shortly after the action of the brassinosteroid.

Checking the effectiveness of priming, the scientists have already tested rapeseed and potatoes, which is a strategically important product for all of Russia. The next test culture will be wheat.

Technically, priming is a simple and quick procedure. Plants are treated with brassinosteroids in an extremely low concentration of 10-10M, which is one billionth of a mole. Then the objects are placed in conditions of chloride salinity, which immediately provokes three types of stress: osmotic (lack of moisture), toxic (negative effect of excess ions), and oxidative (disruption of cell life by reactive oxygen species).

- The chloride salinity model serves as a good testing ground. If the plant survived in such conditions, it means that it is insured in almost any situation, - explains Marina Efimova. - On the other hand, the problem of chloride salinization of soils is relevant for a number of countries, including Pakistan, India, about half of the plowed lands in Central Asia, and the Volga Region in Russia. The tests performed show that this problem can be solved in an environmentally friendly and reliable way - with the help of ingrafting with phytohormones.

According to the scientist, about 70 brassinosteroids are known today. Scientists in Japan, who are the pioneers of these compounds, call them “conductors of the plant kingdom”. Because phytohormones are contained in plants in very low concentrations, large volumes of brassinosteroids for practice are obtained synthetically. So far, only two - epibrassinolide and homobrassinolide, are well studied and are used to create biostimulants.

Biotechnologists have already tested three phytohormones of a steroid nature, which, to varying degrees, are highly effective in protecting plants from multifactorial stress. 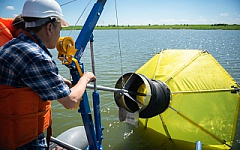