University of Wroclaw paleontologists Krzysztof Stefaniak, Adam Kotovsky, and Ursula Ratajczak, and Andrei Shpansky, their colleague from TSU, are exploring remnants of a Merck's rhinoceros (Stephanorhinus), which lived more than 100,000 years ago. Presumably the rhinoceros died in the swampy terrain, which helped its skeleton survive almost completely. This discovery will allow scientists to obtain new data on the disappeared species, which was one of the largest two-horned rhinoceroses.

- Outwardly the Merck's rhinoceros, which is ecologically woodland, is very similar to the well-known woolly rhinoceros, - says Andrey Shpansky, an assistant professor at the Department of Paleontology and Historical Geology at the Faculty of Geology and Geography. – This species is older than many mammoths because it was situated 600-100 thousand years ago. The object of our study is completely unique: today this is the only surviving skeleton of a Merck's rhinoceros.

The remains of the ancient animal were found by chance, during the construction of a highway near the town of Gorzow Wielkopolski. The road workers had to interrupt large-scale work, and scientists were given only three days to extract the ancient mammal from the petrified ground. Paleontologists were forced to conduct excavation in an emergency mode. 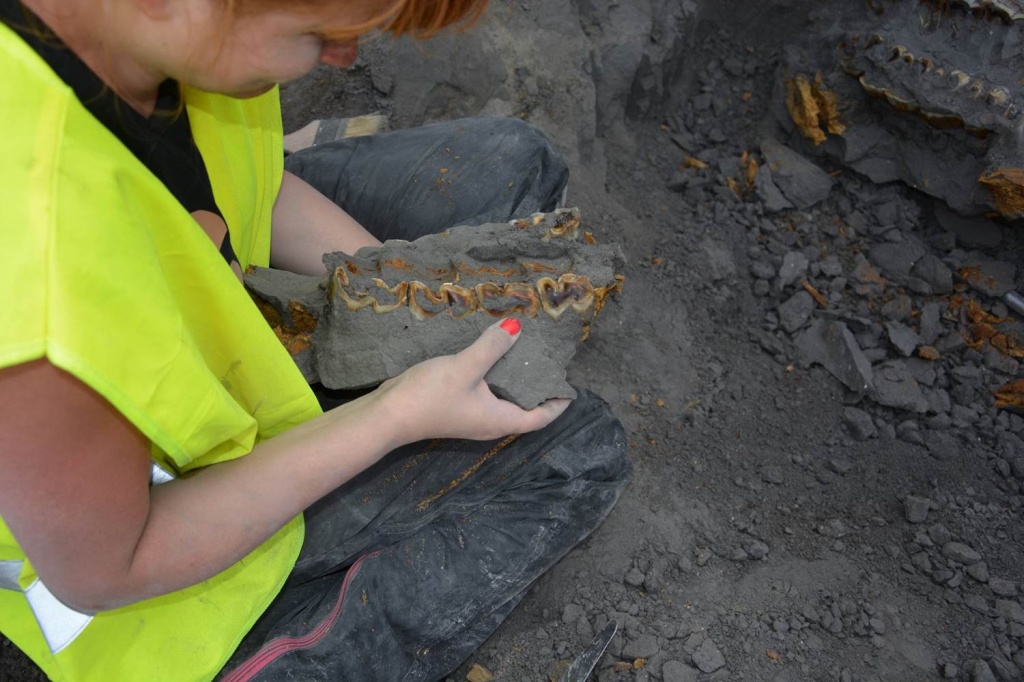 According to scientists, the forest rhinoceros was larger than many of its counterparts, which were the woolly, black, and white African and Indian rhinoceroses. The proportions of the skeleton indicate that the approximate growth of the individual was 182 centimeters at the neck withers and about 160 centimeters in the sacrum. Its age is not less than 20 years because the molars are markedly erased.

- The lower jaw of the Merck's rhinoceros had a very special structure, - says Andrei Shpansky. - Its anterior part (symphysis) was very long and narrow, and at the same time curved like a furrow. This allowed the rhinoceros to thrust its muzzle between the branches, it is very convenient to wrap them around and rip off the leaves from trees or shrubs.

Along with this, it was found that, unlike the squat woolly rhinoceros, the forest rhinoceros was much more slender, with tall legs (length of free limb not less than 80 centimeters) and wide feet. The paws of the animal were perfectly preserved, so paleontologists could determine that the foot was well apart when walking, and due to this, the area of weight-bearing of the forest rhinoceros was approximately 70 % larger than that of the woolly one. This allowed the ancient mammal to easily move through the swampy areas flooded by floodplains, where there were bushes and trees whose leaves it ate.

Perhaps strangely, the rhinoceros died in the swamp, in exactly those conditions for which it was well adapted. This is evidenced by a study of the sediments surrounding the bones and an analysis carried out by the spore-pollen method. The sex of the animal remains unclear. The scientists from Poland are inclined to believe that it was a female, but this fact needs to be clarified. In addition, paleontologists are interested in the questions, Who were the neighbors of the Merck's rhinoceroses? Did the Merck’s rhinoceros live at the same time and place as the woolly rhinoceros? Upon completion of the research, an article describing this rare find will be published in one of the international journals.