Scientists at TSU and Moscow State University are conducting a study of the genes responsible for producing myokines, anti-inflammatory proteins. These compounds play an important role in regulating metabolism in bone and adipose tissues and in the functioning of the brain and digestive organs, and they are a promising tool for correcting various disorders. The researchers are planning to develop and test ways to activate the production of therapeutic proteins to create new therapeutic approaches.

- It is known that myokines are produced in skeletal muscles during physical exertion, but until recently it was unclear which genes encode these proteins and what the conditions of their production are,- says Leonid Kapilevich, head of the TSU Department of Sports and Health Tourism, Sports Physiology and Medicine at Faculty of Physical Education. - In 2018, we and colleagues from Moscow State University with the support of the Russian Science Foundation managed to find out the main principles of the mechanism of myokine production.

As it turned out, the level of their expression directly depends on the exchange of potassium and sodium ions, and on the amount of muscle mass involved in the work. Scientists were able to figure this out with a series of experiments on laboratory animals (mice) and in studies on volunteer athletes. Rodents were subjected to physical exertion (running and swimming), and athletes performed various types of exercises (running, lifting barbells, and others). Scientists have found that exercise stimulates the production of some myokines and inhibits the production of others. Moreover, the researchers identified about 40 genes responsible to varying degrees for the production of proteins with anti-inflammatory action. Under the new project scientists intend to conduct a new series of experiments and find out what the contribution of each gene is to the production of myokines.

- The studies will be conducted on cell cultures under the supervision of the project manager, Professor of Moscow State University and TSU, Sergey Orlov, - says Leonid Kapilevich. - We are going to work out different ways to change the balance of potassium and sodium ions. The most reliable and convenient option is the effect on an enzyme called sodium-potassium ATPhase, which pumps sodium out of the cell and supplies potassium to it, that is, is responsible for the transfer of these elements through the cell membrane.

New fundamental data obtained under the project will help to launch the production of myokines, which can effectively suppress inflammatory processes.

The first part of the project will be implemented mainly at Moscow State University, the second will be at the TSU Cell Laboratory. Its start is scheduled for September 2019. 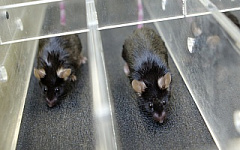