Tomsk State University chemists, with scientists from the Institute of Catalysis of the Siberian Branch of the Russian Academy of Sciences, have developed an aluminum oxide adsorbent with improved characteristics for dehydration oil-dissolved gas (APG).

- The adsorbent is needed to draw moisture from associated petroleum gas, - says Irina Kurzina, director of the TSU Institute of Smart Materials and Technologies. - If this is not done, then paraffin is formed in the gas tanks, which makes it difficult to store and transport APG. Currently, gas processing plants use foreign adsorbents, but ours has higher static and dynamic capacities and as a result is more financially advantageous.

- Sooner or later, the adsorbent gains the maximum amount of moisture and becomes unable to absorb it, so it must be regenerated - heated to evaporate moisture. The regeneration time of our adsorbent is less than that of analogs, - says Irina Kurzina. 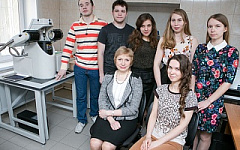