Scientists from TSU's Laboratory of Experimental High Energy Physics and their colleagues from the University of Bordeaux are studying new ways of modeling the effects of low doses of radiation at the cellular level. For the first time, physicists will simulate the effects of radiation on DNA and calculate the probability of developing cancer in various chemical and biological environments.

This is an interdisciplinary project that combines modeling in physics, biology, and biochemistry. Scientists will investigate the processes occurring in the cell as a result of radiation exposure on environmental molecules and biological macromolecules and on subsequent physicochemical and biochemical processes.

When exposed to radiation on the human body, high-frequency radiation or high-energy particles penetrate into the living cell, knocking out electrons from the molecules that make it up. If at the same time ions appear in the cell or its DNA is damaged, then the cell cannot function normally. All these processes will be reproduced by mathematical modeling programs within the Geant4 software package.

- This integrated modeling tool is already used in nuclear medicine for treating oncological diseases and is also in demand in astronautics, for example, for preparing interplanetary expeditions, because it helps to predict the effect of radiation on astronauts and equipment during a long-term stay in space, explains Alexander Khodinov, Head of the Laboratory of Experimental High Energy Physics at TSU.

At the first stage, calculations will be made using the TSU computer facilities. The complexity of such work is that the calculation of each cycle or event takes up to an hour on a modern computer.

- The real representation of even a single cell requires the description of a number of components that is comparable to the description of a large physical installation, adds Alexander Khodinov. - We have to not only combine all the modeling processes in the same environment, but also increase the speed of calculations using hardware accelerators GPU and FPGA.

The new project became possible thanks to the participation of TSU physicists in the ATLAS and CMS experiments at the Large Hadron Collider (LHC) at the European Center for Nuclear Research (CERN). Approaches to creating computer programs for the LHC include developing methods for parallel computing and analyzing large amounts of data, which will now be used to study the effect of radiation on DNA. Earlier, Tomsk scientists and their colleagues from France used the Geant4-DNA user application package for modeling electronic interactions in liquid water. The results are described in the article “Geant4-DNA Example Applications for Track Structure Simulations in Liquid Water: a Report from the Geant4-DNA Project”. 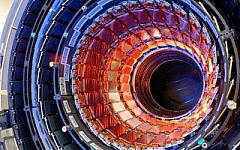