The 5th International Summer School at TSU’s high-altitude station Aktru was held In July, devoted to the study of transformations taking place in the Arctic and Siberia in a rapidly changing climate. Participants were students and scientists from Russia, South Africa, France, Holland, Germany, Singapore, Japan, Britain, Italy, and the USA. For the undergraduates of the TSU interdisciplinary programs Studying Siberia and the Arctic and Biodiversity, the school simultaneously served as a practicum where they could take part in the research of international specialists.

At the plenary session at the TSU Research Library, scientists presented the results of their studies, and the next morning they went to the mountains of Altai. Maximum attention there was paid to the objects in the Arctic and subarctic regions that are the first to react to climate change - glaciers, permafrost, soils, and biota.

Scientists from TSU and the University of Sheffield (Great Britain), Tokyo Metropolitan University, University of Fort Hare (South Africa), and other leading world universities spoke of the changes that are taking place throughout the planet. At the high-altitude station, students could see some of the most significant natural phenomena with their own eyes.

For example, a series of lectures was devoted to the study of the melting of glaciers. On one hand, it is an indicator of contemporary transformations. On the other, it is a trigger for new natural disasters: rising world ocean levels, changes in water temperature and concentration of salt in the seas, and others. - Unfortunately, in the mountains around Aktru, the melting process can be seen with the naked eye,- says Sergei Kirpotin, one of the main organizers of the school and the director of the Center of Excellence Bio-Clim-Land. Regular observations have been conducted here for several decades, and scientists are recording the retreat of glaciers with special markings. The spped of these processes is frighteningly high: in a year, the glacier tongue retreats by 50-60 meters. It is possible that in the coming years, the area of the ice cover will be reduced by 100 meters. And this will be an anti-record.

Along with this, it is in the mountains that the change in biodiversity is especially noticeable. TSU biologists who came to give lectures in Aktru say that decrease in the number of species is an evolutionary process, but at the present time, its speed outstrips natural rates by almost 200 times. Nature simply does not have time to adapt to such a rapid rate of climate change on the planet and to establish adaptation mechanisms. It is necessary to find out why this is happening. Participants of the summer school have decided to engage their future with the study of climate and environmental change to try to solve this research task.

The summer school serves not only as a good educational platform where you can hear lectures from the world's leading researchers, but also it helps to establish new professional contacts and generate ideas for scientific projects.

- For example, this year Nick Hudson, who is now receiving a Ph.D. from the University of Alaska (Fairbanks), came to the TSU summer school for the second time, - says Olga Shaduiko, director of the Center for International Scientific Collaboration of the University. - Last time at the Aktru school, he met a participant from the University of Beijing (China). The professional interests of the young researchers were similar, and in the Altai they outlined the direction of collaboration for their scientific groups. It is very important for us that the school of TSU and Aktru act as a link for scientists exploring the Arctic and Siberia.

This time the summer school may facilitate another scientific union: TSU and the University of Fort Hare will discuss creating a joint educational project that could begin in 2019. 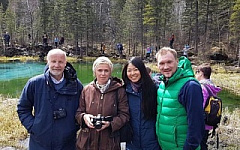