TSU Biological Institute scientists surveyed the area planned for the development of new hydrocarbon deposits in the Yamalo-Nenets Autonomous District. In the south of the Gydan Peninsula, researchers evaluated the diversity of birds as the main component of the local fauna. During the expedition, Institute staff discovered previously unknown breeding grounds for the red-breasted goose, one of the rarest and most beautiful species listed in the International Red Book. Other red book species of birds were also found. From the results of the survey, zoologists will make recommendations that would minimize the impact on avifauna of field development.

- Environmental engineering surveys are an indispensable condition before starting the construction of any industrial facility, - says Igor Korobitsyn of the Biological Institute. - The data is subsequently used for comparative analysis and assessment of the industrial impact on ecosystems in the process of environmental monitoring. The subject of our research was birds as one of the most prominent objects of biodiversity in shrub tundra.

As Igor Korobitsyn notes, it is here that rare avifauna are found, including large birds. As a result of the survey, scientists obtained data that are important not only for industry but also for science. In particular, in the south of the Gydan Peninsula, a previously unknown breeding ground of the goose was discovered. This goose lives in the bounds of the tundra zone only in Russia and breeds offspring here only. A feature of this representative of waterfowl is its bright plumage. This particular bird was chosen as a symbol of the Russian ornithological society and decorates its emblem.

- The red-breasted goose nests on the slopes of high cliffs near the peregrine falcon, another red book species, - explains Igor Korobitsyn. - In the places we found, this neighborhood is also certainly present. A distinctive feature of the peregrine falcon is that this predator guards its nest very reliably. For this reason, some other birds settle nearby, thus falling under the falcon’s protection. The parental instinct of a predator prevails over the hunting instinct, the same feature noted in other predators, for example, the polar owl.

In addition, other rare birds were also found in the area surveyed: the white-tailed eagle, tundra swan, and lesser white-fronted goose. Based on the data obtained, zoologists will develop a program aimed at preserving biodiversity. Scientists note that it is extremely important to find a compromise between the conservation of rare species and the development of natural resources. 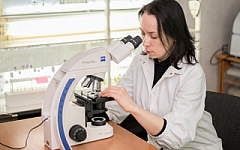