Nanna Heitmann studies at the Faculty of Photojournalism and Documentary Photography at the University of Hannover in Germany, and has come at TSU for a six-month exchange program. The young woman told us why a photographer should work on a sheep farm, how to make friends in different countries, and what is interesting in Siberia.

Nanna speaks good Russian. It’s heredity: her mother is from Russia, and her grandmother still lives in Moscow and has worked all her life as an interpreter.

“From childhood, my mother tried to talk with me in Russian, but I often resisted, answered her in German. Now I'm sorry, I want to make up for lost time - to learn Russian as well as possible”, she says with a smile.

Studying the language is not the only reason Nanna Heitmann came to Tomsk: here she has an internship in photo and photo design at the Faculty of Journalism. The faculty has long been collaborating with the University of Hanover, the exchange of students and teachers has become a tradition, and Nanna decided to take advantage of this opportunity. Moreover, Siberia is the motherland of her ancestors, in particular, her grandfather.

Traveling to a distant unfamiliar Siberia is not her first adventure. Nanna has already been in Nepal, India, Indonesia, and Israel, and hitchhiked almost the whole of Europe. Sometimes it was necessary to spend the night in a tent, although she often stopped at friends or in cheap hotels. And everywhere she was primarily interested not in famous sights, but the way of life, work, and cultural traditions of ordinary people.

“If you travel like an ordinary tourist, it's hard to see people in their daily lives,”- Nanna says. “We need some time to live among them, to understand, to feel how people live, to see what cannot be seen with a third-party glance.”

So, once she helped to care for sheep on one of the ecological farms in Norway, for almost a month. Nanna found the owners through the Internet and wrote to them. She was not paid for the work, but was given shelter, food, and the opportunity to make a wonderful photo essay about the life of Norwegian farmers.

“Once we made banana wine there. At that time, there was a marathon in that area, bananas were provided for the athletes, and there are many of them left. We didn’t know what to do with them and grandfather - the owner of the farm - decided to try to make a wine from them. It turned out even better than we expected” - laughs Nanna.

Another “epic work experience” was in Nepal, where Nanna spent a month cultivating rice. For the heroes of her reports, she even descended even into the mine for 1,700 meters.

“For me, it was a discovery, I did not imagine that such work still exists in Germany - old and very heavy, even despite modern technologies” – Nanna shares her impressions.

She sends her reports to various magazines, with which she collaborates. Sometimes they give her tasks themselves, for example, she went with a journalist to Israel to report on refugees.

In Siberia, Nanna also wants to realize a project - to make a photo essay about the lives of people who inhabit the area along the Yenisei.

“I have an idea to make story photos in the style of fairytale illustrations of Bilibin. As a child, I loved reading Russian fairytales, and I want to create such a modern fairytale in photographs - about the life of people in those places, about their traditions, and about shamans.”

Nanna is planning to sail along the Yenisei by postal boat, stopping in the settlements. And if it works out, visit Baikal. On the question of whether it’s scary for her to travel alone here in remote places, she shakes her head negatively.

“Not yet. In India, I also traveled mostly alone, it was more terrible there - the culture is different, and the attitude to woman is different.

But on the road, she often meets different fellow travelers or just like her, travelers with whom it is interesting to share the road for a while.

Now she already has many acquaintances in different countries, including Russia. In Barnaul, for example, a young woman with whom she was traveling along Nepal is waiting for her.

“The photo opens a lot of doors. I want to see how the world is arranged. When you understand people better, there is no prejudice, no fear of other nationalities, religions. And the world is constantly changing, and the pictures remember it the way it will never be again” - Nanna thinks. 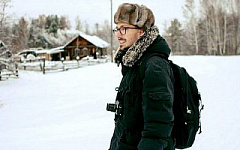