Scientists from Tyumen, Tomsk, Krasnoyarsk, Khanty-Mansiysk, and Barnaul are studying the characteristics of the people of the south of Western and Middle Siberia during the Neolithic and early Bronze Age (6,000 years BC – 2,000 years BC). As a result of their interdisciplinary research, they learned new information about the appearance of the population, restored 150 skulls, and described the specifics of migration of people from western territories.

- The purpose of the project is to identify the stages of the formation and integration of the peoples of ancient Altai in the Neolithic and Early Bronze Ages. The reconstruction of historical events, characteristics of life activity, and interaction of ancient populations are possible only with interdisciplinary research of the “human – society – nature” system, - noted Marina Rykun, the head of the TSU Anthropology Cabinet. - In ethnogenetic studies, the role of archaeological and paleoanthropological sources increases with the antiquity of monuments. The task of a paleoanthropologist is to extract from biological material the information necessary for historical reconstructions. This helps to predict the scale of migrations and their paths, determine the contact zones and interaction between the ancient populations, and identify the demographic specifics of the population and the features of racial and genetic processes at different cultural and chronological stages in the areas studied. The main sources of research are about 500 human remains from the burial complexes of the Neolithic and Early Bronze cultures of southern Western and Central Siberia, 350 of which are being studied for the first time. Anthropologists have determined how the ancient population adapted to the conditions of the high mountains and the sharply continental climate of the Altai highlands. The results are published in the Bulletin of Archeology, Anthropology, and Ethnography. The scientists proceed from the assumption that body size and its proportions may have an adaptive value for human existence in a certain ecological environment.

- The proportions of the limbs and their segments are strictly genetically determined, but the longitudinal dimensions of the bones of the limbs, which actually calculate the height and weight of individuals, are subject to various exogenous factors, such as climate, nutrition, and degree of physical activity,- explained Marina Rykun. - In addition to indirect effects, this is a culture, a household, a diet, and a direct connection between climate and morphotype changes is possible. In biology, there is a hydrobionts rule, suggesting an increase in the size of an animal’s body with increased communication with the aquatic environment or wet habitats.

The territory of Gorny Altai is characterized by a large variety of so-called local climates, from quite comfortable throughout the year to extremely harsh in winter. Nevertheless, the population used not only the territories with comfortable conditions for a living but also high-altitude hollows with an extremely harsh climate.

Anthropologists correlated measured data of skulls and skeletons buried with geographic and bioclimatic parameters and found that the main mechanism of adaptation of the population of Gorny Altai to the conditions of high mountains and sharply continental climate was the increase in body size of the originally tall and large proto-European population of Eastern European origin. This process was accompanied by an increase in the overall size of the skull, in particular, its height, and an increase in the width of the facial section in men, while the remaining racially differentiating characteristics did not change. For example, the growth of men in the middle and high mountain regions of Altai was 4–5 cm higher than in men in the foothill areas. Accordingly, their weight was 3-5 kg more. Women in the middle and high mountain regions also had a greater weight, about 3 kg, in contrast to women living in the foothills of the Altai. 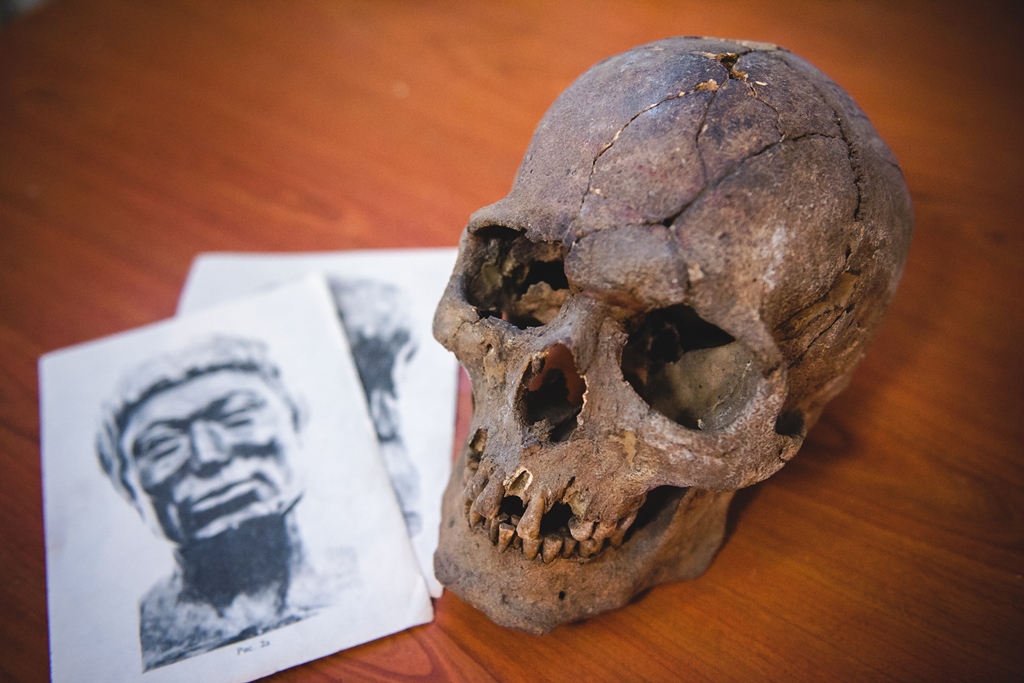 It is assumed that groups of Europioids in the second half of 3rd millennium BC migrated to the southern regions of Western and Southern Siberia, Xinjiang, and Western Mongolia, in which men prevailed,. These are mainly pastoralists and people with a different religion engaged in mining and metallurgy. Migrants interacted with the aboriginal population, partly adopted their cultural traditions and married local women.

An interdisciplinary study is planned to continue in 2019. It is supposed to enter into the general register data on Neolithic and Early Bronze cultures in the south of Western and Middle Siberia and to prepare a collective monograph on the migrations of the population of ancient Altai and their consequences.

Anthropological materials, which are the primary source of such interdisciplinary research, are usually found at research institutes, universities, for example, at Altai State University, Research Centre Tyumen Scientific Centre of Siberian Branch of the Russian Academy of Science, and Krasnoyarsk State Medical University. For Tomsk, such a storage place of scientific processing is the anthropology office of the Faculty of Historical and Political Sciences at TSU. At present, there are 5,810 skulls from ancient and late burial grounds. This is a great base for the study of the ethnic and racial genesis of the peoples of Siberia.