A joint expedition of TSU and the State Hermitage Museum discovered a unique burial site during the excavation of the Oglakhty burial mound (Khakassia, Russian Federation). What is so unique about the discovery is the organic objects of the Tashtyk culture (1700 years old) found on the site. This will help historians understand the ancient culture of the Sayan-Altai region.

The expedition to Oglakhty burial mound is being conducted under the Presidential grant “The Heritage of the Oglakhty Range Through Time and Space”. Volunteers from 10 regions of Russia are participating in the expedition. Besides excavation, there are open lectures conducted on archeology and history of the Sayan-Altai region, 3D modeling, and methods of natural science in archaeology (magnetometry, georadar research, aerial photography, and dendrochronology).

Currently, archaeologists have cleared out one burial and found remnants of a woman and one more person. However, the site is unique for different reasons: archaeologists found a rarity – objects made of wood, bark, and cloth.

“Most of the material culture of ancient civilizations was gone before archaeology became a science. That is why most of the time archaeologists deal with stone, ceramics, and metal. But our expedition found wooden objects, and not just bits and pieces but solid wood, just slightly damp,” – explained Evgeny Vodyasov, leader of the expedition and head of the TSU laboratory Artefact. 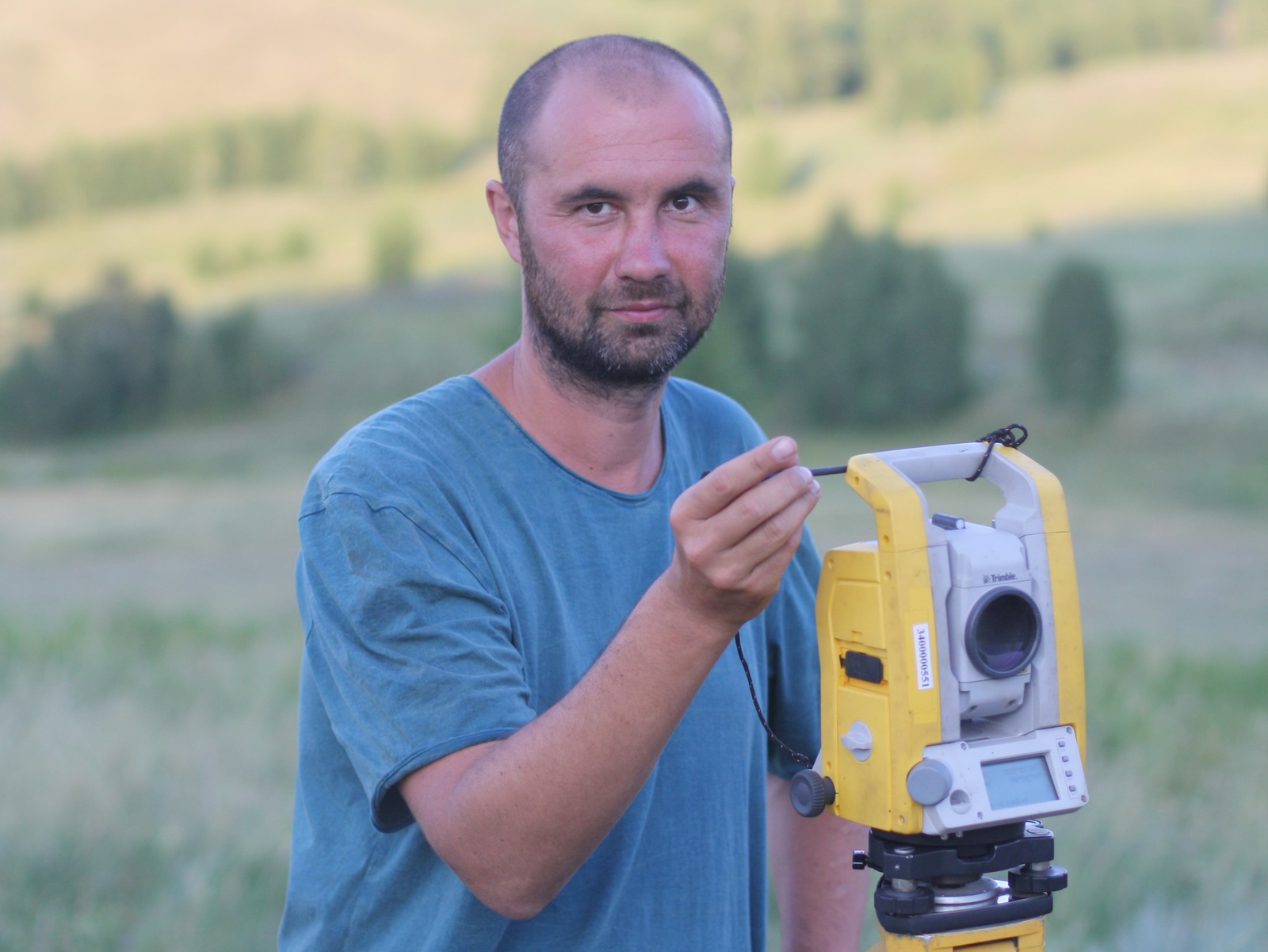 It may take years to study the discovered objects, but the results will be most interesting and will reveal a great deal about Tashtyk culture.

Tashtyk Culture is a south Siberian archaeological culture of the Iron Age (1st-7th centuries AD). While being a descendant of the Tagar (part of the wider Scythian cultures), it fundamentally differs by many new traditions. The Tashtyk still mainly lived by agriculture and animal husbandry.
There are two types of Tashtyk burial rites. The first is burial mounds with mummified human remains and human-sized burial dolls with cremated human bones inside of them. Mummies have plaster masks with the original ornaments. Later (5th-7th centuries), there are locations with up to 200 people buried in one place.

The unknown woman of Oglakhty

The bones with skin remnants found in the burial supposedly belong to a woman. Near her skull archaeologists have found numerous pieces of a plaster mask. Unfortunately, the burial is severely damaged by mice and ground squirrels that love making their nests in cavities underground. Because of that, the skull is displaced and the mask is fractured. Art restorers hope to later put it together like a jigsaw puzzle.

There were cremated remains found near the woman’s body. They were put inside a burial doll, but the doll decomposed with time. Svetlana Pankova, keeper of the Oglakhty collection of the State Hermitage Museum, says that there were ten wooden objects found in the burial: vials, an ornamented barrel, something like a small tub, and something that the archaeologists have named “the box”.

“This object has its own function for sure, but for now we do not know what it is. It is interesting to discover what was kept inside the box. This can’t be identified at a glance, we need to conduct chemical analysis of the soil. Perhaps we can deduce the content from ethnographic parallels. But even now we can confidently say that it is a unique object never before seen in ancient cultures,” said Svetlana Pankova.

Restoration in the field

The person responsible for the preservation of the tomb chamber and the objects found there is Natalia Vasilyeva, a restorer at the State Hermitage Museum.

The objects have not suffered from time because the wooden tomb chamber was covered in birch bark and buried under a layer of rocks and soil. The inside of the tomb maintained the perfect temperature for conservation, very close to the temperature in a refrigerator – around 10 °С. 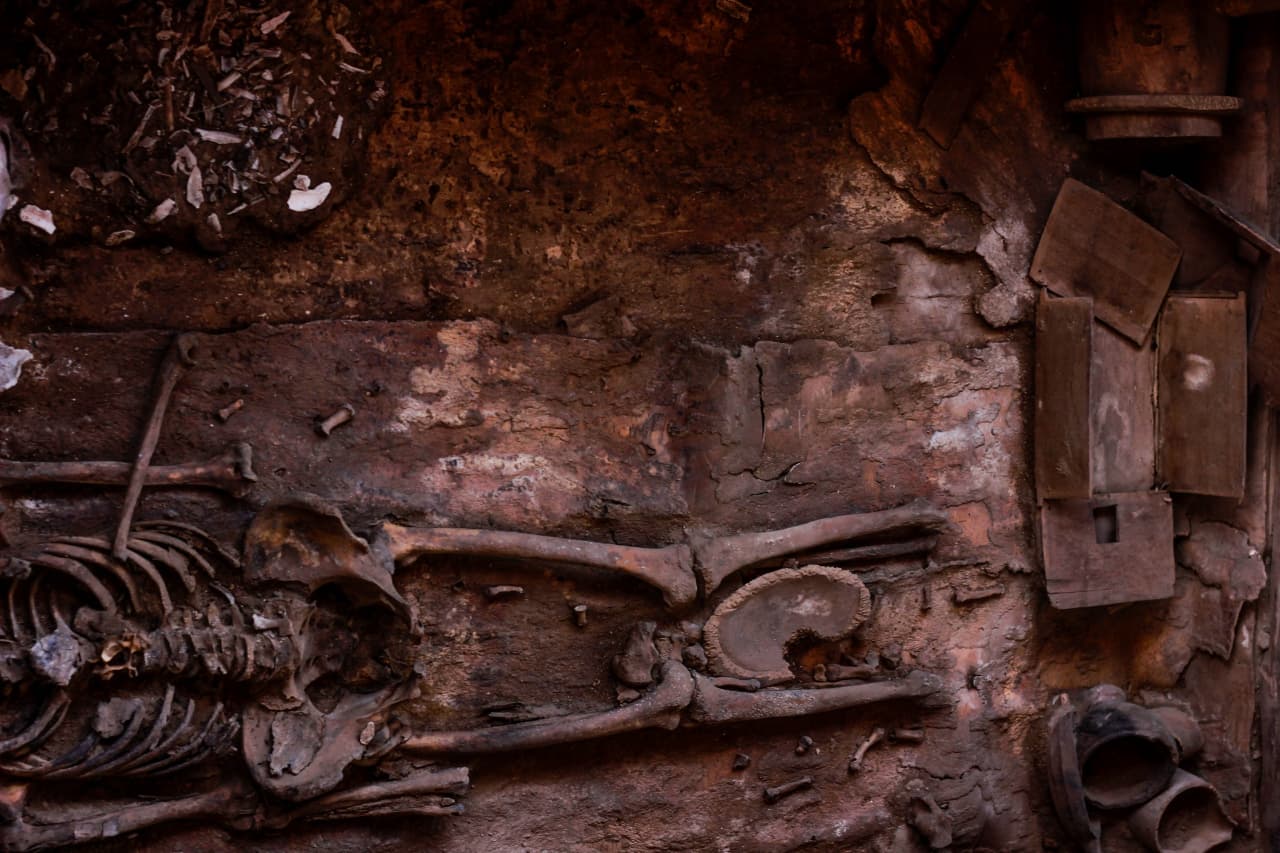 Further study and radiocarbon dating of the objects found will provide a more precise age for the burial. The dating will also be done using methods of dendrochronology.

“The finds will have to wait for a long time before they turn into museum exhibits. After that, they can be displayed at traveling exhibitions, including in Tomsk and Abakan. For now, my role is to preserve the objects so they can live in their new environment,” explained Natalia Vasilyeva.

Driver of the excavation

This season, the excavation is done not only by professional archaeologists but also by volunteers from 10 regions of Russia.

“I have some experience in archaeological work, predominantly on the sites of Kuznetsk Basin. However, Khakassia is a unique region for all archaeology lovers. Local monuments can reveal a great deal about many cultures and peoples, which is quite rare for Siberia,” said Mikhail Danilov, a volunteer.

The project “Heritage of the Oglakhty Range Through Time and Space” can involve volunteers from all over the country due to the support of the Presidential Grant Fund.

Besides working at the site, the volunteers participated in field lectures conducted on archeology, field restoration, photogrammetry, 3D modeling, magnetometry, and georadar research.

The expedition is an internship for two TSU faculties - Faculty of Historical and Political Studies and Higher School of Journalism. “It was an intentional experiment when students of different fields practice together. History students participate in the excavation, anthropologists work with human remains and study the local community’s attitude towards archeological monuments. Video and photography students film the findings of archaeologists. The article about our findings was written with the help of journalism students. We hope to make a big multimedia project about the Oglakhty ancient artifacts,” says Olga Zaitseva, head of the TSU Department of Anthropology.

Two archeological sites are involved in this expedition. The second one is different from the first – the area suffered from wildfires some time ago.

Fieldwork in the Oglakhty Range will continue until all the findings are described and prepared for further studies. So there is still time for more discoveries.

The article is written by the students of TSU Faculty of Journalism Varvara Slepkova, Mariya Petrishcheva, Varvara Baskova