The Aeroschup technology created by TSU biologists to clean the bottom of reservoirs of petroleum products will be used to solve the problem of plastic contamination. The project team has already completed laboratory tests that confirmed the ability of the Aeroschup to extract plastic particles from bottom sediments. The scientific team plans to conduct field tests of the technology in the summer of 2020.

- Plastic is present everywhere a person’s foot has stepped,- says Danil Vorobyev, director of the TSU Biological Institute. - Moreover, the results of the large transarctic expedition made by Russian scientists under the guidance of TSU professor Alexey Orlov showed that macroplastic is also found where there are no people, for example, in the Kara and Chukchi seas, carried by rivers that are now heavily polluted.

As Danil Vorobyov notes, the synthetic material located on the surface of bodies of water is not very difficult to clean and it can be easily collected. If this is not done, plastic fouling and the inclusion of mineral particles occur over time, that is, it acquires negative buoyancy and settles to the bottom, where it becomes microplastic and decomposes, releasing toxic substances.

Microplastic enters food chains because all animals eat it, from zooplankton to fish and birds. Synthetic material, in which toxic impurities are added (dyes, flame retardants, and others), can accumulate in the tissues of living organisms. Once in the digestive system of animals, toxic compounds can cause organ damage and other undesirable effects. Also, the microparticles of the plastic easily absorb other toxic substances, such as pesticides and dioxins, and just as easily excrete them into the body that they enter.

TSU biologists plan to solve the problem of plastic pollution with the help of the Aeroschup, which has proved its effectiveness in cleaning oil from the bottom sediments of water bodies.

- The technology is based on the principle of flotation - the device collects oil from the bottom due to molecular adhesion of petroleum hydrocarbons to the boundary of two phases: air and liquid. It means that air bubbles separate it from the bottom and raise it to the surface, - explains Danil Vorobyov. - Laboratory tests on microplastics (particles up to 5 mm) showed that the Aeroschup works well with this material. Under hydropneumatic action, mineral particles are separated from the plastic, buoyancy becomes positive, and polluting components rise to the surface of the water, after which they can be mechanically collected. 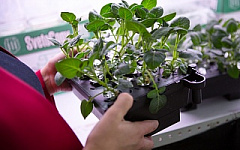