The scientists of the Faculty of Chemistry created a new technique for the spectral analysis of hair, which gives a large amount of information about the human body and its predisposition to certain diseases. This development by chemists will help doctors in different specialties: from neurologists to allergists to increase the accuracy of diagnosis and the quality of patient care.

- Chemical analysis of hair is a very informative research tool, - says Vladimir Otmakhov, one of the authors of the new methodology. - This method allows determining the concentration of vital microelements in the human body. Imbalance in them leads to the development of various diseases, many of which are hidden for a long time. The microelement analysis of biosubstrate helps to identify serious ailments and, in the best of circumstances, to prevent their developing in the risk group.

Scientists of Laboratory of Environmental Monitoring of the Faculty of Chemistry have developed a fundamentally new technology of hair research, based on the method of arc atomic and emission spectrometry with a multichannel analyzer of the emission spectrum.

Typically, first the sample for investigation is transferred to the solution, and then its composition is studied using expensive reagents. Chemists offer a different method of sample preparation: scientists burn biosubstrate in a special chamber at a temperature of 400–450° C, study the ash residue of hair, determine macro and micro elements, and eliminate matrix effects, which increases the accuracy of the analysis.

This new technique that allows determining the concentration of just about 30 chemical elements has already proven its effectiveness. The scientists analyzed the hair of patients who suffered an ischemic stroke. As a result, regularities in the variation of elemental composition were revealed, in particular, an increase in the concentration of conditionally toxic elements, cadmium and lead, and a reduction in the concentration of zinc compared to reference values. The new knowledge can be used both for diagnosis and for tracking the dynamics of patient recovery.

No less interesting results were obtained when the Faculty of Chemistry conducted another study, in which the IQ level (according to the Eysenck test) and the hair microelement composition of the students were compared.

- 50 Bachelor’s students of our faculty took part in the experiment, - says Vladimir Otmakhov. - The students conducted all the work—sampling, preparation of samples, and the analysis— independently in their laboratory work on spectroscopy. It turned out that the higher the level of intelligence, the lower the concentration of tin in the body. At the level of 130-140 IQ, the content of this element is 0.5 μg / g. The same situation existed with cadmium. A high content of 1 μg / g was noted at the level of 90 IQ. The students whose intellectual potential is much higher (130 -140 IQ) had a concentration of cadmium that did not exceed 0.2 μg / g.

After the completion, the chemist analysts will be given the right to provide a new service to the public and issue official analysis protocols on the basis of which it will be possible to establish the elemental status of a person. The hair analysis is carried out according by prescription from doctors and is used as an auxiliary tool for formulating an accurate diagnosis. 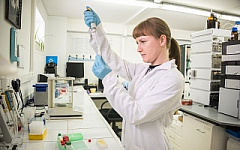