Jakob Schnetz, a student from Germany at the Faculty of Journalism of Tomsk State University, was one of the finalists in a world contemporary photography contest held in Amsterdam. The work of Jakob that reached the final was done during his exchange study in Tomsk, and TSU students helped to do this project.

The contest for young photographers was held by the Dutch magazine LensCulture, which over the past 10 years has become one of the most authoritative world sites for modern photography, visual storytelling, and multimedia projects. Photographers from 16 countries took part in the creative competition: Great Britain, Germany, Spain, Netherlands, USA, Venezuela, Switzerland, Guinea, Greece, Russia, Italy, Japan, South Korea, Finland, Bangladesh, Canada, and Turkey. Their work was evaluated by the photo editor of The New York Times Magazine (USA), the assistant curator of the Department of Photographs of the Getty Museum in Los Angeles, the head of photography of the Guardian (London, Great Britain), the founder of the festival Addis Foto Fest (Addis Ababa, Ethiopia), and other eminent professionals from the world of modern photography.

Jakob Schnetz, a student at the Hochschule Hannover, University of Applied Sciences and Arts (Germany), studied in Tomsk from September 2016 to March 2017. The Faculty of Journalism of TSU has a partner agreement with the Hannover university, and German students regularly come for one or two semesters to Tomsk. Jacob's photo project “A Reindeer and a Burning Oil Can” was filmed in Yakutia in February 2017. Alina Pinchuk, a student of the faculty, helped to organize the shooting process, negotiate with the participants in the filming, get to Yakutia, and return to the German photographer.

- While working in Yakutsk, Jakob and I were asked to be participants in the filming of the Yakut cinema about the zombie apocalypse, - says Alina. - The temperature in the street was -35, but the zombies do not freeze, so we had to remove our outer clothing. The face and hands were painted with black paint. It took several minutes to stand around the main character in the final scene. Then we realized that three minutes can last forever ... But now, when the movie was released and we also became a part of it, we understand that it was not in vain.

The photos that Jakob Schnetz made in Yakutia were already exhibited at his personal exhibition in the German city of Neuenhaus. On March 2, he will open an exhibition in Hannover, where present his Yakut photo project. And in May of this year, the work of all the winners and finalists in the contest of contemporary photography of LensCulture, including the photo project of Jakob, will be exhibited in London, at the Somerset House. It is one of the twenty most visited museums in the world. 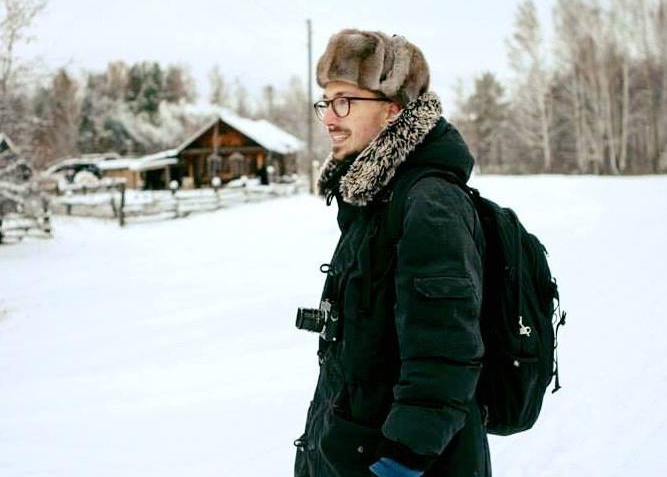 Part of the photo project “A Reindeer and a Burning Oil Can” is here: https://www.lensculture.com/2018-lensculture-exposure-award-winners?modal=jakob-schnetz-the-winner-o...

The partnership of the Faculty of Journalism of TSU and Hochschule Hannover has existed since 2010. Students photographers from Hannover, who came to Tomsk for training and did their creative work here, became winners of various European competitions for young documentary photographers. And their photos are published in the world’s best publications, including the newspapers Washington Post (USA), Neue Zuercher Zeitung (Switzerland), La Repubblica (Italy), and Die Zeit (Germany), and in magazines, Newsweek in the USA and Japan, and Le Nouvel Observateur in France.

In March of this year, two more German student photographers, Nanna Heitman and Daniel Shatar, will come to Tomsk for several months.