A group of physicists led by Rashid Valiev, associate professor at TSU’s Faculty of Physics, has created a model for calculating the photophysical characteristics of molecules – one that is applicable for molecules of any nature, including rare earth lanthanides. Due to the introduction of the anharmonicity effect, the model can predict the properties of molecules even before their synthesis, without carrying out experiments. An article about the new model was published in the journal Physical Chemistry Chemical Physics.

The physicists achieved the creation of a universal model applicable to molecules of any nature due to the introduction of the anharmonicity effect. This effect was introduced earlier in diatomic and triatomic molecules, but photophysicists and photochemistry consider large molecules with tens of atoms, and for this problem, there was no correct mathematical model.

- We can study molecules that emit in the infrared, visible, and even ultraviolet ranges, based only on theoretical calculations, without involving experimental fitting information. And this makes it possible to predict the properties of molecules even before their synthesis, which is much more economical than synthesizing blindly, explains Rashid Valiev.

The effect of anharmonicity occurs when the vibrations of atoms in a molecule are strong, and the energies are large. In this case, the vibrations of atoms will no longer be correctly described in the harmonic approximation and it is necessary to introduce a deviation from it. The inclusion of the anharmonicity effect is especially required when calculating the characteristics of molecules that emit light in the blue and ultraviolet ranges, because their vibrations occur with high energy. 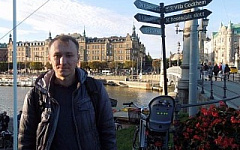