During an expedition to the Krasnoyarsk Territory, scientists from Tomsk State University and St. Petersburg State University (TSU and SPBU), discovered the remains of a previously unknown mammal – the baidabatyr.

The animal belonged to multituberculates, one of the ancient taxa of mammals known from the Middle Jurassic.Their name derives from the structure of their teeth.  These animals appeared in the Jurassic period and survived the mass extinction of species at the end of the Cretaceous. Some species of multituberculates became extinct only in the Paleogene. Thus, this group has existed for about 150 million years.

- The baidabatyr is a multituberculate mammal. We found only one tooth and immediately realized that the characteristic features of the structure - the number and location of the tubercles - indicate that this is a species previously unknown to science. This is an important find for Western Siberia, - said Stepan Ivantsov, a TSU paleontologist.

He clarified that there are no present representatives of this species - they died out about 20 million years ago.

- Judging by the structure of the tooth, it was a herbivorous animal, probably it ate seeds. The size of the tooth is a couple of millimeters, which means that the animal was the size of a guinea pig or slightly larger. The name was invented from the words “bidarka” (kayak) because the place of the expedition can be reached only by kayak and “batyr” as “hero” from the Turkish language. First representatives of this taxon were found in Mongolia, and the name of most species traditionally includes Mongolian word “baatar”. We decided to name it in Turkish, because it is one of the local languages, - added Stepan Ivantsov.

According to the scientist, the find was made on the Bolshoi Kemchug River in the remote taiga. The southeast of Western Siberia in the Early Cretaceous was a refugium: an area where some species of the Jurassic period (about 145 million years ago) were preserved in the Cretaceous - that is, they existed for several million years longer than on the rest of the planet.

The remains of the animal were discovered in the summer of 2015. However, before the scientists officially announced their discovery, they had to describe the find and publish an article in a leading international journal. 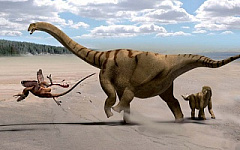