TSU biologists monitor bird migration with ISS
Biological Institute
science
international activities
Siberia
TSU Biological Institute researchers have joined an international project, ICARUS. Initiated by Russia and Germany, it aims to monitor animal migration patterns on the planet using new technologies. Ornithologists say that this partnership will open doors in the field of bird migration. It will enable scientists to find previously unknown migration patterns and wintering grounds with the possibility of organizing conservation areas for rare species. The scientists will be able to more precisely identify birds’ life span and cause of death, trace migration patterns of infectious diseases, and even use them as an early warning system for climate change, pandemics, and natural disasters.


“We were able to integrate into such a major project because of the previous research work conducted by the ornithologists of the TSU Zoological Museum and established professional contacts,” explains Nina Moskvitina, head of the Laboratory of Biodiversity Monitoring at TSU Biological Institute. “The educational and research station ‘Kolarovo Training Ground’ also plays a major role. For many years it provided a place for systematic animal research done in collaboration with Russian and international colleagues.”

TSU biologists are contributing to the project in 2021 by researching two species of cuckoos. The first, the common cuckoo, can be found all over Eurasia, from Kamchatka to Great Britain, while the second, the oriental cuckoo, nestles in forest areas from the Far East to Eastern Europe. The choice of objects has two key reasons, the first being the decline of the common cuckoo population in Western Europe. European colleagues are trying to find the cause of the decline analyzing the situation along the route of migration and on wintering grounds, which scientists 10 years ago could not locate precisely. The second reason is that the size of cuckoos best suits this kind of research. 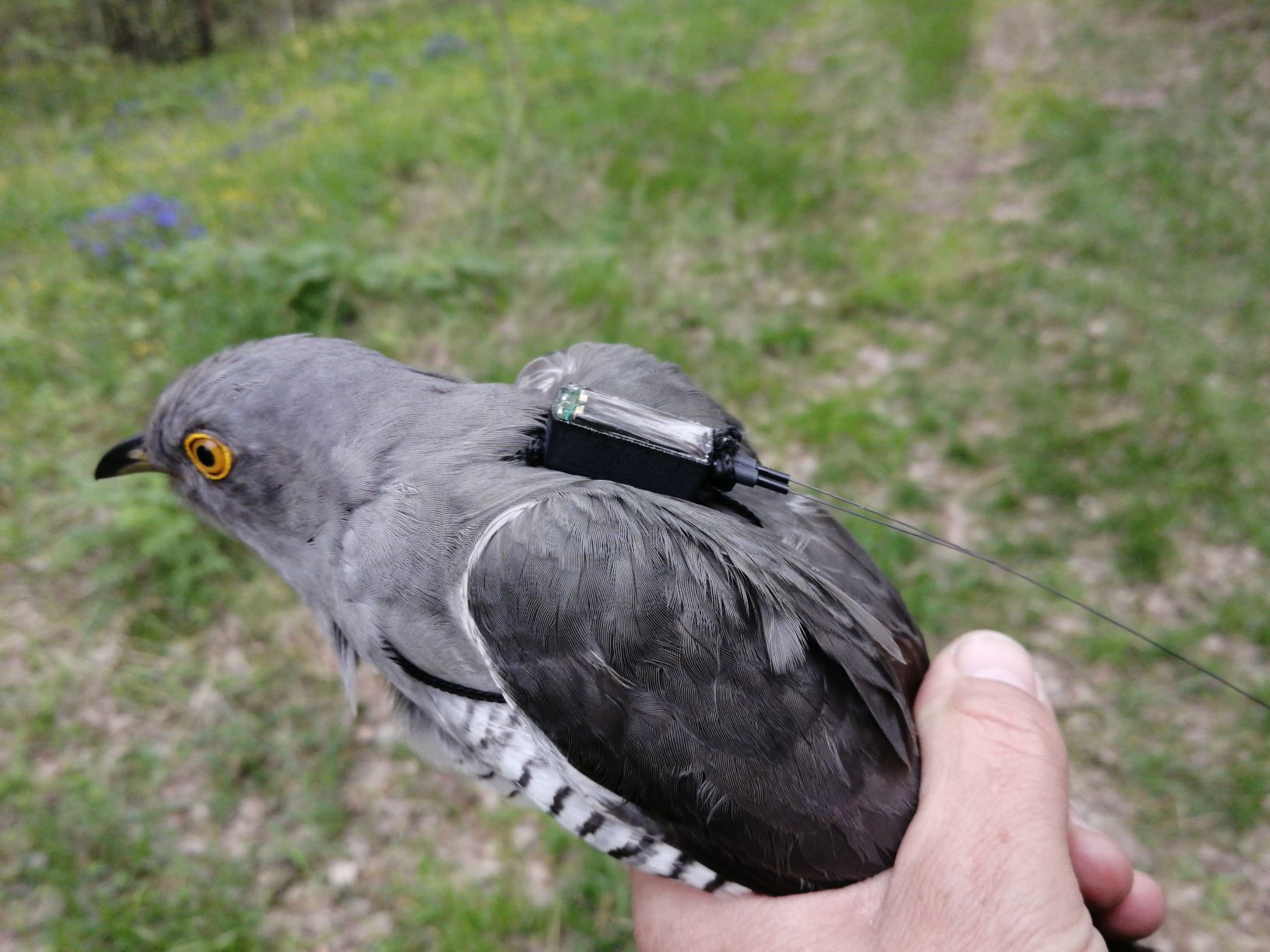 “ICARUS transmitters weigh 5 grams and are half the size of a matchbox, with a solar battery and 15 cm wire antennae. The transmitter should weigh no more than 5% of the bird’s mass for birds that weigh more than 100 grams. The bird should be able to freely fly and feed carrying that load, so not all species are fit for this experiment. A cuckoo is the size of a pigeon; it hardly notices the additional weight, so the research results show no signs of interference,” says Sergey Gashkov, Candidate of Science in Biology, head of the Education Department of the Zoological Museum, Assistant Professor at the Department of Invertebrate Zoology and Ecology of TSU.

Together with colleagues from the Zoological Institute of the Russian Academy of Sciences and the Karelian Research Centre of the Russian Academy of Sciences, TSU biologists have caught and marked 15 birds (13 common cuckoos and 2 oriental cuckoos). For now, smart transmitters record all information, and when the birds cross the 55th parallel of latitude, the data will go to the antenna on the Russian segment of the International Space Station. Then the data will be transmitted to the earth station and become available for researchers. The results are published in the open database MoveBank. Siberian cuckoos’ tracks are expected to appear in the database in September. The sensors can track not only the birds’ route and stops, but also their body temperature, speed, and direction, as well as atmospheric pressure, air temperature, and humidity. That way the scientists are able to “see” birds online, when they move, eat, or sleep, and, additionally, assess the impact of the environment on the birds’ vital functions. The transmitters are equipped with a solar battery, allowing the transmitter to work longer and track a bird’s movements all its life.

The results of this research will help verify several hypotheses. For example, scientists think that birds from different Siberian populations travel to Africa differently. It is supposed that common cuckoos from southern populations of Western Siberia fly via the Middle Asia mountainous area, while cuckoos from Eastern Siberia travel through Mongolia, China, and India. The project will inform us where birds from different breeding grounds in  Russia settle on the African continent, how migration pattern and conditions affect their population, and which infections they can transmit.


“The information researchers gather with ICARUS seems astounding. For example, it was discovered that the bar-tailed godwit on the route from Alaska to New Zealand can fly non-stop for 9 to 11 days. Ornithologists could not even imagine it. New technologies can upend our view of fauna and broaden it significantly,” says Sergey Gashkov.

ICARUS stands for International Cooperation for Animal Research Using Space. Scientists taking part in the ICARUS initiative are working together to develop a satellite-based system to observe small animals such as birds, bats, and turtles.
It is coordinated by the Max Planck Institute of Animal Behavior (Radolfzell, Germany) and the Institute of Geography of the Russian Academy of Sciences (Moscow, Russia). The technical part of the research is carried out by S.P. Korolev Rocket and Space Corporation “Energia” (Russia) and SpaceTech GmbH (Germany) under the agreement between State Space Corporation (Roscosmos) and German Aerospace Center (DRL).