A team of the TSU Interdisciplinary Laboratory for Computer Modeling and Condensed Medium Analysis has studied how the microstructure of VT6 titanium alloy specimens affects the elastic recovery of scratches that form in them during scratch testing. There is a new mechanism that explains the significant recovery of scratches in VT6 samples with a bimodal microstructure: in the process of scratching, reversible phase transformations develop in them. The results can be useful in the development of methods for increasing the wear resistance of alloys.

The basis of the VT6 alloy is titanium, aluminum, and vanadium. This alloy is used in many industries - from the manufacture of large-sized welded and prefabricated aircraft structures to medicine. At the same time, the use of titanium alloys is limited by the high cost of manufacturing the resulting products by traditional methods. This makes it necessary to look for new ways - for example, actively developing additive technologies. However, the use of such technologies for the manufacture of parts from metallic materials encounters a number of problems associated with the presence of internal defects in the parts, porosity, and microstructure inhomogeneity.

To study the deformation behavior of alloys, TSU scientists applied scratch testing. It is used to control the mechanical properties of materials: they are scratched with an indenter with a hard tip with a controlled load (constant or variable) in a hardness tester. The main attention is paid to the study of the plastic displacement of material by a moving indenter, assessment of hardness, determination of the coefficient of friction, and other characteristics of the samples. At the same time, the influence of the microstructure of materials on their wear resistance is still insufficiently studied.

- Scratching the surface with an indenter is an effective way to study the patterns of abrasive wear of materials because the mechanisms of deformation and destruction of coatings during scratch testing and abrasive wear are of a similar nature, - explained Svetlana Barannikova, professor of the Department of Solid Mechanics of Deformable Solid State of the TSU Faculty of Physics and Technology.

After the laboratory specialists carried out computer simulations using the molecular dynamics method, it was possible to explain the experimentally observed difference in the scratch profiles depending on the direction of movement of the indenter of VT6 samples. The calculations were carried out by Andrey Dmitriev, Professor of the Department of Metal Physics at the TSU Faculty of Physics.

- The practical significance of the research results lies in obtaining new knowledge necessary for the production of products with modified surface layers and functional coatings that have a simultaneous combination of such characteristics as high wear resistance, hardness, thermal and electrical conductivity, and low slip resistance, - noted Andrey Dmitriev. 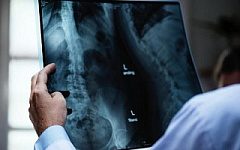