The ATLAS collaboration of the European Centre for Nuclear Research (CERN) invited Tomsk State University scientists to develop radiation-hardened coordinate detectors for future experiments on the properties of the Higgs boson.

The scientific team led by Oleg Lobanov, Professor at TSU’s Faculty of Radiophysics, has for many years been developing unique technologies, one of which makes it possible to create semiconductor detectors of ionizing radiation based on gallium arsenide. Back in late 1996, these detectors were tested at CERN and showed better results compared with advanced foreign analogs. But the lack of experience in manufacturing gallium arsenide detectors in Russia led to the fact that in the ATLAS experiment has been using silicon detectors manufactured by a Japanese company.

Further studies of the properties and characteristics of the Higgs boson, discovered by CERN on July 4, 2012, require increasing the intensity of the colliding beams of protons.  The radiation background is significantly increased, so there is a need for detectors with increased radiation resistance. And when it was decided to upgrade the detector of ATLAS, the Tomsk scientists were sent a proposal to develop matrix detectors using technology owned by TSU.

- We intend to get a firm foothold in the ATLAS project, designing and supplying 8000 matrix detectors that will be installed directly in the experiment and should function until 2035, - says Oleg Tolbanov, head of the Laboratory of Functional Electronics - It will be a good contribution to the solution of the problem of recognition of Tomsk State University. 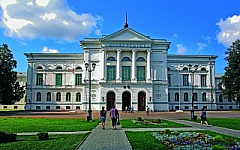