On March 1, the TSU Online volunteer organization held an open event where Russian and international students could find a partner for learning a foreign language in a friendly environment. The opportunity to meet a new friend and simultaneously a teacher was interesting to 122 students from various universities of Tomsk - TSU, TPU, TSPU and SibSMU.

Language exchange is a popular method of learning languages that is based on mutual exchange of knowledge and practice of language between speakers of different languages.

- This is also one of the ways to integrate international students into our university community. It is important for us to create an environment that offers a variety of opportunities to facilitate the process of entering a different culture, and this way of studying a foreign language is an excellent tool, - says Lydia Zhuleva, head of the Department of Social Adaptation and Support of International Students in TSU’s International Division.

As expected Russian and English were the most popular languages to study. But, in addition, native speakers of Chinese, French, Italian, Spanish, Polish, Czech, Arabic, Japanese, Turkish, German, and Hindi were at the meeting.

-The result of our meetings is forming tandem pairs, usually one Russian participant and one international student, - says Lisa Shtar, the creator of the Language Exchange at TSU. - It is difficult to say about specific countries because everyone indicated only their native language. For example, in Africa, some know French at the native level, but we can not say that they are from France.

At the moment, the organizers are still collecting feedback from the participants. As Lisa noted, the first responses received were completely positive. Many students were able to find a partner for a tandem.

- We met many people from many countries and found new friends, and we were trying to speak both in Russian and English, - Marika Krutilova and Silvia Sulovkova, students of the Faculty of Philology from the Czech Republic, shared their impressions. - For example, one Russian young man really wanted to speak English, and we spoke Russian. In the end, we spoke two languages.

Since 2015, the TSU Online volunteer organization has held the open exchanges of the Language Exchange once a semester. The next meeting is scheduled for November 2017. 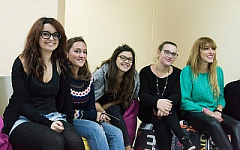 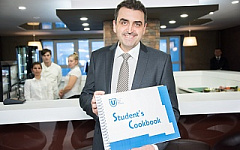