The idea of opening the first university in Siberia arose in the best minds of our Fatherland. Seven major cities of Siberia fought for the right to open the university, but it was Tomsk that had such an honor. Tomsk University became the ninth higher educational institution in Russia and the first in Siberia.

Within its walls, as before, following the plan of the founders, old traditions continue to develop and new traditions are being established. But the main mission of the university has remained unchanged throughout its existence: to remain a classical research-type university with an education system that combines the educational process based on fundamental scientific research and satisfaction of the spiritual needs of the individual. Over its history, the university has become a major center of attraction for creative forces and talents, a generator of advanced scientific ideas, an example of the embodiment of the best traditions of Russian higher education.

For a huge number of talented young people, admission to TSU is the embodiment of a dream of getting a quality education as a guarantee of a professional career and success in life, and we are well aware of our measure of responsibility for the future of our country. Teachers, staff, students – we all love the university, its traditions, its amazing atmosphere of joint creativity of teachers and students. We honor the memory of the founders and creators of the university, who so wisely and visionarily defined the principles and priorities in its development for many years, laid high ideals of service to the Fatherland. We are proud of the graduates of the university – there are more than one and a half hundred thousand of them, and all of them, with their inspired and creative work, have multiplied the glory of Russian science, education and culture, the glory of our alma mater. We are confident in the wonderful future of Tomsk University! TSU is the Imperial University in Tomsk established by the decree of Emperor Alexander II for the economic and cultural development of the vast territory of Russia from the Urals to the Far East.

TSU is one of the winners of the Priority 2030 program of strategic academic leadership among Russian universities. In October 2021 the university joined the first group of winners in Research Leadership and was awarded the maximum grant for its development program. Previously, TSU was one of the leaders of the 5-100 state program.

The development program of Tomsk State University for the next ten years is framed around contemporary challenges and correlates with the Strategy for Scientific and Technological Development of the Russian Federation. The university is fully ready for its transformation and integration into the economic and social agenda of the country and the region.

The university target model is built on four pillars. The first is the “breakthrough university”. Along with the training of specialists, the university tackles various industrial tasks from the creation of new medicines to the production of new types of eco-friendly products and biofuels. The second pillar is its focus on meta- and transdisciplinary research. The third pillar is the quality of life and sustainable development, and the fourth is the ecosystem. Large-scale challenges can only be addressed through joint efforts, so the university serves as a communication platform for government, industrial partners, and science.

TSU students and graduates are members of the country’s Olympic team and winners of international and Russian competitions. TSU athletes compete in 20 sports. The university SKAT Scuba Diving Club has a worldwide reputation and includes 20 world champions, 15 European champions.

Tomsk State University is included in the State Code of Especially Valuable Objects of Cultural Heritage of the Peoples of the Russian Federation by the decree of the President of Russia. A quarter of TSU students are international students. The number of students from abroad, especially from the CIS countries and Southeast Asia, is growing annually. In total, students from nearly 70 countries study here. Students may conduct joint research in research laboratories. In addition they have open access to one of the largest university libraries in Russia – the TSU Research Library (more than 4 million copies and subscriptions to all leading databases).

Since 2022, the Big University of Tomsk enables TSU students to have free access to other universities in the city, including sports centers and libraries.

E-learning and distance learning technologies have been introduced into all forms of education at TSU. TSU creates and develops its own EdTech products, thus promoting high-quality education in Russian universities.

The university offers a wide range of additional courses: online courses, and professional training and advanced training programs. Read more at the link.

In the Employment Promotion federal project, TSU has formed a network of more than 100 partner universities and trains Russian citizens in relevant subject domains. Read more at the link. TSU has developed a wide array of scientific schools that preserve and foster outstanding research traditions. The achievements of leading schools are included in the golden fund of Russian science and regularly receive numerous grants and awards.

The key development areas of TSU include human sciences, chemical technologies and materials science, radiophysics, robotics, biotechnology, computer sciences, and artificial intelligence technologies. The research findings are jointly used by the university and its partners to create new technologies and tools, ensuring the security of Russia and strengthening its sovereignty.

TSU has 24 dissertation councils. Each year the university trains more than 100 early-career researchers that are in strong demand in science, higher education, and various sectors of the Russian economy due to their high-quality education.

TSU youth traditionally are leaders in the number of presidential and governmental awards in the country. The university also ranks second in the number of medal winners of the Russian Academy of Sciences. 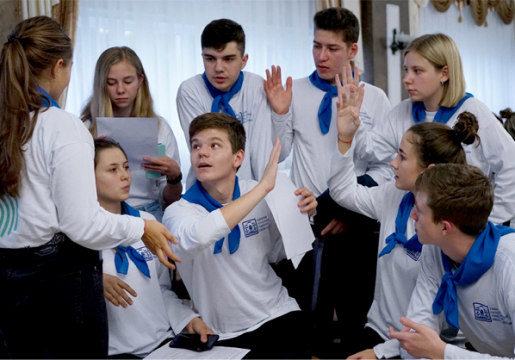 There are several specialized schools that provide training of school students for admission to TSU.

Development of partnership with big business

Interaction with these enterprises corresponds to the priority directions of the university's development, and consequently, to the scientific, educational and infrastructural potential.

Interaction with companies within the framework of the implementation of innovative development programs is aimed at the development and introduction of new technologies, products and services corresponding to the world level. The Research Library was founded in 1878 and opened along with the Imperial Tomsk University in 1888. It began accepting books before the foundation of the university’s building had been laid. Now it is one of the largest and oldest libraries east of the Urals, its collection consisting of 8 million print and electronic media, with over 126,000 entries belonging to the manuscript and book monuments department (data correct at January 1, 2022).

Every year, the library is visited by over 200,000 readers; the number of requested print sources can be as high as 300,000; and the electronic resources are used by more than a million people. The library has an information center operating 24/7 and 9 reading rooms with open access to the library collection; a research space available for individual- or group-based work; better customer service thanks to the RIFD technology; and more than 70 resources available by subscription. Language clubs, exhibitions, presentations, seminars, excursions, quests, conferences, strategic sessions, and library forums enjoy continued popularity among the city, university, and professional communities.

Adherence to the university’s values, a caring attitude towards tradition and cultural heritage, initiative, openness, and an innovative approach are what makes the Research Library not only the go-to place for students, teaching staff, research fellows, and various communities, but also an essential building block in fulfilling Tomsk State University’s “third mission”. Siberian Botanical Garden of Tomsk State University is a major scientific and research facility. The part of the botanical garden located in the city (10 ha) comprises a nature reserve park, as well as a greenhouse and orangery on adjacent land. Together they form an ensemble where landscape and architecture are consistent.

The greenhouse and orangery complex consists of 4 orangeries and 2 greenhouses. The greenhouses are divided into 18 sections with varied microclimates.

Additionally, affiliated with the Siberian Botanical Garden is the Ecosystem Dendrologic Territory, with an area of over 100 ha: a spectacular canopy of trees with natural landscapes and homogenous stands that are a treat to the eyes.

The Siberian Botanical Garden includes over 8000 species, forms, and types of plants, among which are 3000 tropical and subtropical plants on display in the garden’s orangeries.

Siberian Botanical Garden’s scope of activities includes research and education, as well as public awareness projects of all sorts.